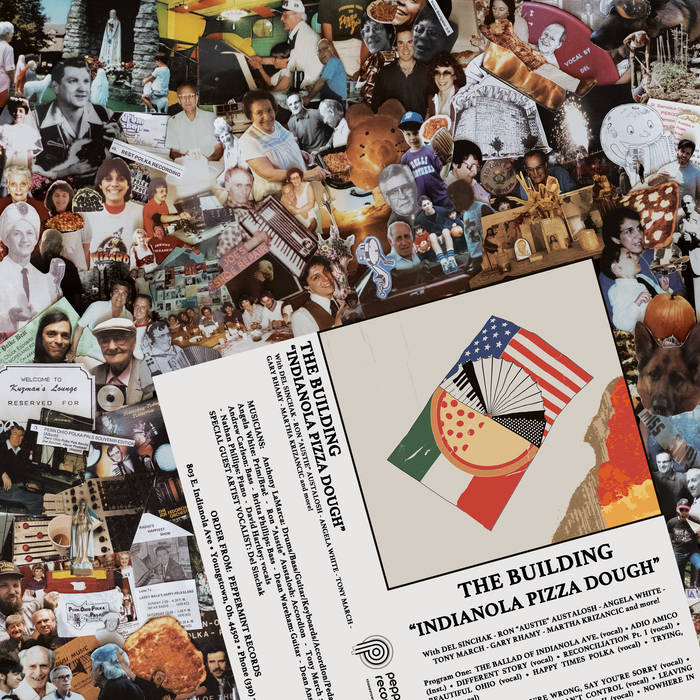 WELL HELLO THERE GOOD PEOPLE… and welcome to the happy sounds of INDIANOLA PIZZA DOUGH. Thank you for being there. Thank you for letting us entertain you. We’re going to walk right out the door here on Indianola Ave, and head down the hill…lotta good memories. It’s a place that some of us have been. Some haven’t. It’s a place that doesn’t exist anymore but will always be there. I was certainly never there, but I got my name from it. Margie made the pizza and Rocco would fix your shoes. Played a little guitar too, with his brother Giuseppe, my grandpa, and the writer of ADIO AMICO, “Goodbye, friend” (he spelled it that way, so I spell it that way). But we were told a DIFFERENT STORY…The top of the box was torn…What I thought was a whole pizza was only a slice…Where to begin? Where does it end? Why does it have to be this hard? Is that what happened? Is that what you think happened? Is that what you were told? Or is that what you wish had happened! Is it only the truth if you trust the person telling you? What’s more important than telling the truth? RECONCILIATION may be more important (it’s at least the first part). If we can’t make someone tell the truth then we have to change ourselves to make sure we don’t repeat the same mistakes. From Italy…Poland…Croatia…Slovenia…Slovakia…Hungary… BEAUTIFUL OHIO is where they came. Hoping for HAPPY TIMES, but not American enough. They had to prove themselves to those who had emigrated here themselves, but forgot what it was like…cycles, cycles…and now look down upon those who are coming here today. Martha spoke to me that day, she’d lived a life that I’m living. So much of her and Johnny in my own life. I was TRYING, TIRED of going through the same mistakes…same tragedies… How hard is it to ADMIT YOU’RE WRONG, SAY YOU’RE SORRY?! Tammy Records’ own Tony March has a new one for us that he calls YOU EXCITE MY SOUL. There’s a (rama-lama) ding dong playing cowbell on the upbeat number CAN’T CONTROL. (Gary sounds younger at the top of this track!) When we were LEAVING INDIANOLA, Rocco wanted an exact replica of his house rebuilt. Him and so many others cutting ties and not worrying about what was to become of the neighborhood. It’s the same cycle again. Never taking the time to work on fixing the problem…that’s the second part of RECONCILIATION…to say that you won’t continue contributing to the cycle. Come on…let’s go… What we used to love here is NOWHERE IN SIGHT. Do I hear spirits of Electric St.? A nice waltz is what they asked for at the pizza shop that night. But it was so long ago who can actually remember? But most likely at some point the pizza went from my family to the studio to feed the many musicians I’m here to tell you about. And today the pizza still goes from my family (my brother, this time) to the studio to feed the many musicians who are here playing on this album…well…mostly me and Gary (and a little bit of cheese for Peppermint Petra…woof!). Not to mention that another notable Peppermint Gary (one who possesses “iron knowledge") lives down the street from my brother’s shop. It’s safe to say that the endless eternal crust that connects us is never broken, even when we reach for another slice.

In memory of Martha Krizancic and Austie.

Bandcamp Daily  your guide to the world of Bandcamp